Group H of the 2022 World Cup features two favorites with Portugal and Uruguay, who will meet the two interesting underdogs Ghana and South Korea. Will the team of superstar Cristiano Ronaldo have a chance to win the title in his last World Cup tournament?

We analyze the four squads and give you the very best World Cup betting tips for Group H.

Portugal has yet to claim a World Cup title, but did win the 2016 European Championship, beating France 1-0 in extra time at the Stade de France. Their best World Cup finishes came in 1966 and 2006, when they finished third and fourth respectively. This tournament is particularly special for Portugal, as it will be the last World Cup for 37-year-old superstar Cristiano Ronaldo.

However, the exceptional footballer does not carry the entire burden in the national team, as there are numerous international class players in the squad with players such as Bruno Fernandes, Diogo Jota and Bernardo Silva.

Ghana qualified for a World Cup tournament for the first time in 2006 and immediately reached the round of 16. Four years later, they even made it to the quarterfinals at the World Cup in South Korea, where they were only eliminated in extra time against Uruguay. After failing to qualify for the 2018 World Cup in Russia, they are back this year and can look forward to unexpected new reinforcements. Coach Otto Addo was able to persuade Inaki Williams, a true goal-scorer, to play for Ghana in the future. The England U21 team player Tariq Lamptey also decided to play for Ghana, as did the DFB trio Stephan Ambrosius, Ransford-Yeboah Königsdörffer and Patric Pfeiffer. So, we can look forward to the newly formed Ghanaian national team.

Despite being a small nation, Uruguay celebrated numerous successes in the world of soccer. In 1930 and 1950 they became world champions, and even though they were not able to follow up on these great accomplishments, they repeatedly made it to the quarter finals or even further. At the 2010 World Cup in South Africa, they even finished in 4th place. An elimination in the group stage would therefore be a real disappointment for the team around Edinson Cavani, Darwin Núñez and Luis Suárez.

South Korea’s big moment came at the 2002 World Cup on home soil, when they were narrowly beaten 1-0 by Germany in the semifinals and then lost the match against Turkey for fourth place. Before that, however, they beat Spain and Italy in the knockout phase in a highly surprising fashion. South Korea has been a permanent visitor to World Cups since 1986 and has now qualified for ten World Cup tournaments in a row. After reaching the round of 16 in 2010, they were eliminated in the group stage in both 2014 and 2018. The star of the team is without question Spurs foreign player Son Heung-min, who won the title of top scorer in the Premier League in 2021/22.

The bookies are certain who the favorites in this group are. Portugal are favored to win the group with odds of @1.66 at Bet365. As for Uruguay, winning the group brings odds of @3.00, while Ghana and South Korea are rated as clear underdogs, which is reflected in the odds of @12.00.

With odds of @1.18, Portugal are also the clear favorites to advance to the round of 16 in Group H. Uruguay making it through the group stage brings odds of @1.50, while the underdogs from South Korea and Ghana are worth 3.25 times the stake.

For single match betting odds, you should consider “under”-betting especially when it comes to Uruguay matchups.

After all, in the 2021 calendar year alone, four games ended in a goalless draw. While we believe Uruguay will prevail against Ghana and South Korea, we are betting on narrow victories, such as at the 2018 World Cup when Uruguay won their group games against the underdogs from Egypt and Saudi Arabia both 1-0.

Portugal are one of the favorites to win the 2022 World Cup in Qatar!

If you enjoy live betting, we recommend you to ➜ register at overlyzer.com to be able to follow all significant soccer matches worldwide live and see in real-time when a team is pushing or has a weak moment.

Who will win group H?

Since Portugal have the lowest odds, they are the favorites to win the Group H at most of the betting sites. However, due to the fact that the odds are so low, we recommend to rather bet on Uruguay.

Edinson Cavani and his teammates know how to win against Portugal, having knocked Cristiano Ronaldo and his team out of the tournament in the round of 16 at the last World Cup. Cavani scored both goals in the 2-1 win and will surely remember that triumph when the whistle blows for the match between the two teams.

Portugal and Uruguay are the favorites to advance to the round of 16, but South Korea and Ghana have the potential to cause a stir. South Korea have already beaten some very prestigious opponents in the current calendar year, including Iceland (5:1), Chile (2:0), Iran (2:0) and Egypt (4:1). However, they were shown their limitations by Brazil, who won 5:1. They also lost 3-0 to Japan.

Similar to South Korea, Ghana is also a somewhat unpredictable team. This is primarily due to the five new players mentioned above who are now eligible to play for Ghana. Inaki Williams in particular, one of the most reliable strikers in the Spanish Primera Division, could strengthen Ghana enormously in terms of quality.

However, the two underdogs lack consistency, so we ultimately opt for a wager on Portugal and Uruguay.

Betting Pick: ➜ Portugal and Uruguay advance to the round of 16 @ Bet365

With Cristiano Ronaldo, Bruno Fernandes, João Félix, Diogo Jota, André Silva and Gonçalo Guedes, Portugal has numerous highly dangerous attacking players, but they rarely bring all their potential to the table in the national team. Coach Fernando Santos is a very pragmatic coach, which is why he is often considered too cautious. Of course, the elite quality of the attacking players can still lead to big wins with soccer betting strategies.

The same is true with Uruguay. The South Americans are known for having a solid defense that is difficult to break down. The central defenders often play very hard and, in general, games involving Uruguay can be very tense and rough. On the attack, goals are scored by the likes of Cavani and Darwin Núñez, but over betting should not be a primary consideration when Uruguay are on the pitch.

South Korea is frequently capable of scoring a lot of goals, but this is partly due to their relatively weak opponents in Asia. But we’ve also seen plenty of goals against European and South American clubs this year, like in the 5-1 win over Iceland, the 5-1 loss to Brazil and the 2-2 draw with Paraguay.

For Ghana, it remains to be seen how the newly acquired players will change the team’s structure. In general, however, the Ghanaian national team has rarely scored many goals in international matches recently. In the 2021 calendar year, for example, eight out of ten matches ended with two goals or less.

Speaking of Over/Under Betting:  Have you already seen our Over/Under tool? Our betting tool shows you even before the game starts the probabilities of how many goals will be scored in a game and if a game has an “over” or an “under” trend!

➜ who will be FIFA World Cup 2022 Top Scorer

Group H kicks off four days after the opening match on November 24th. The final matchday will take place on December 2nd. The second matchday will be particularly exciting when the favorites Portugal and Uruguay face each other.

In the first group match, we are betting on a narrow victory for the South American side, which will put them in a promising position ahead of the match against Portugal. South Korea’s defense has not always been very tight in the recent past, so Uruguay’s strong attacking players should find a gap or two.

We bet that Uruguay will succeed in the opening game of Group H against South Korea.

Portugal should prevail here as well. Cristiano Ronaldo and his teammates need to avoid a poor start, otherwise things could get tricky in the second group game against the tough Uruguayans.

We bet that Uruguay will succeed in the opening match of Group H against South Korea.

Both teams know that only three points will be helpful here if they want to advance to the round of 16. We expect that both sides will play for a win and that we can enjoy several scoring opportunities during these 90 minutes.

So, we predict that there will be several goals in this match, which is why we recommend an over bet.

At the 2018 World Cup in Russia, Uruguay beat Portugal 2-1 and knocked them out of the tournament. This time, too, we are betting on a very balanced and rather tactical match, in which both teams could settle for a draw.

We recommend on the one hand an under bet, on the other hand alternatively a three-way bet with a draw as the result.

It is not unlikely that Portugal will need to win at least one point in their last group game to advance to the round of 16. This should be feasible against the not particularly consistent South Koreans, especially since Portugal has the broader squad and can replace any suspended or tired players much better than South Korea.

Thus, we bet that Portugal will win the last group match against South Korea.

Ghana and Uruguay rarely provided games with many goals in recent years. Since there are a lot of tactical considerations in the last round, we are betting on a low-scoring match.

Who will play in World Cup Group H?

In Group H, Portugal, Uruguay, Ghana and South Korea will face each other.

Who is the favorite in World Cup Group H?

Portugal are the firm favorites, but Uruguay also has a decent chance of winning the group. The underdogs in Group H are South Korea and Ghana.

In which stadiums will World Cup 2022 Group H be played?

Group H matches will be played at Education City Stadium in ar-Rayyan, Stadium 974 in Doha and Lusail Iconic Stadium in Lusail. 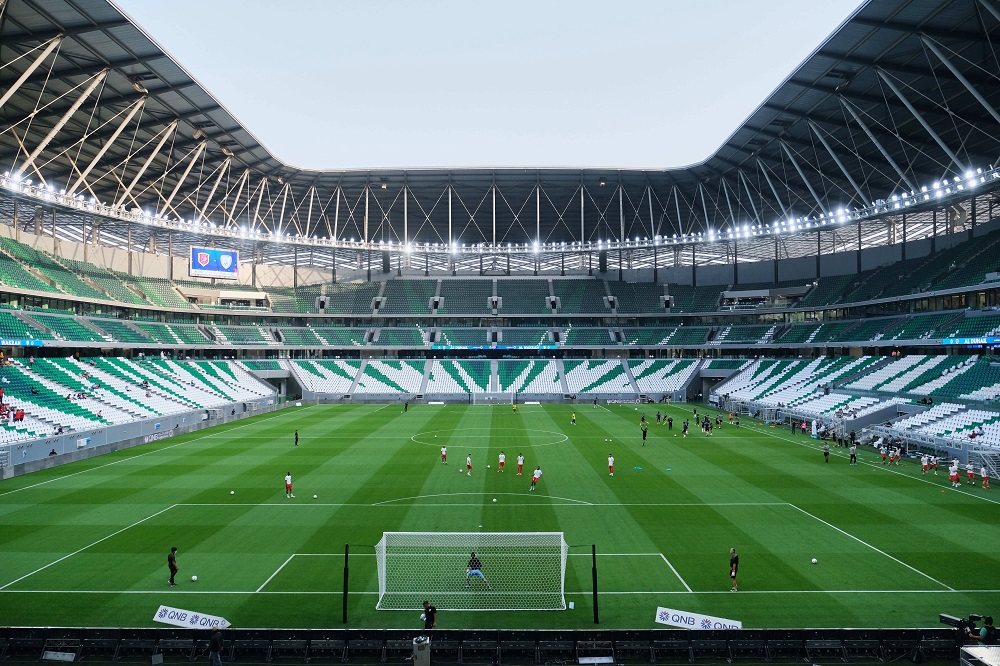 Who will the group winner from group H play against in the round of 16?

The winner of Group H will meet the runner-up of Group G. In Group G, Brazil, Serbia, Cameroon and Switzerland will face each other.